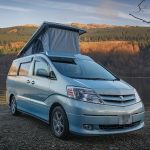 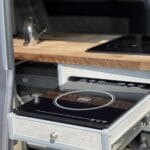 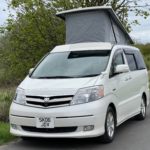 CampervanCo. has teamed up with finance experts Pegasus Finance who tailor finance options to your specific circumstances and needs. Find out more, including terms and conditions, via the link. Enquire about this van

This high spec campervan has just arrived and is ready for its next adventure.   It is a silver 2006 Toyota Alphard hybrid Eco Pioneer Tribrid, which is ULEZ compliant.  It has an automatic gearbox, and being 4 berth,  will easily sleep 4 people, and is  4 wheel drive.  It has just 60,000 miles on the clock and comes with full service history, 1 year MOT.   This van comes with a very high specification with lots of options over and above standard, including an LPG conversion, which is capable of running at 60 mpg.  It also has a solar panel, sliding rails in floor to allow seats to move forward providing extra boot space, upgraded stereo system, c-rail, tow bar and much more.  This van comes with a 6 month no quibble warranty.  The van will be fully serviced before purchase.

Due to the high volume of interest, a deposit is required to secure sale.

Imported From Japan
A high-grade used vehicle converted to a high-spec ground-breaking design/upgrade.

4-star rating for emissions which are 75% lower than required by Japan’s 2005 Emission Standards, and 10% better than Japan’s 2010 Fuel Economy Standards. All base vehicles manufactured during or after 2006 conform to Ultra Low Emissions standards required, for example, by London’s Ultra Low Emissions Zone ULEZ.

The 2.4-litre 2AZ-FSE petrol engine has been developed specifically for use in hybrid systems and features a high-expansion ratio cycle that raises efficiency and reduces friction.

Insurance & Road Tax
Classed as a campervan insurance Group 2. Road tax on these vehicles, as with all Japanese imports, is £275 per annum – regardless of fuel type.

NCAP Crash Testing & Vehicle Registration
All vehicles comply to strict Japanese safety standards which means they comply fully with UK and EU safety standards. Our import service fully inspects, imports and registers all the vehicles into the UK market and they receive standard, age-relevant number plates.

The Toyota Alphard Hybrid is one of the most popular hybrid vehicles in Japan and incorporates Toyota’s Hybrid Synergy Drive. This combines the power and convenience of a low-emission petrol engine and the economy and efficiency of an electric power capture and drive system. When the engine is running, it charges the battery via the generator; when driving conditions allow, such as in slow-moving traffic, the generator can cut out the petrol engine and let the electric motor take over for zero-emissions driving.

The sophisticated engine management system can sense when the car is stationary and will switch off the engine to conserve power and cut emissions, automatically starting up again when required. The best bit about these vehicles is their ability to capture kinetic energy while driving. Every time the vehicle slows down or brakes, the regenerative braking system converts that movement energy back into electric charge which is stored in the Hybrid battery. This is recycling in its purest form and makes these vehicles greener and more versatile than any campervan on the road.

Removable table for use inside or out

Overhead LED lighting and spotlights to sides and roof

240 hook-up for a range of appliances from campsite electrics

12v leisure battery with a range of sockets

Enquire about this van A DIFFERENT TYPE OF ADVENTURE

Necessary Always Enabled
Necessary cookies are required for core functionality on the website to work correctly, such as security, network management, and accessibility.
Non-necessary
Statistics Statistic cookies provide insights into how functions around the site are used and interacted with, and allow us to improve user experience in the future. Marketing Marketing cookies allow us to tailor and provide the most relevant services and products on the site.
Functional
Functional cookies help to perform certain functionalities like sharing the content of the website on social media platforms, collect feedbacks, and other third-party features.
Performance
Performance cookies are used to understand and analyze the key performance indexes of the website which helps in delivering a better user experience for the visitors.
Analytics
Analytical cookies are used to understand how visitors interact with the website. These cookies help provide information on metrics the number of visitors, bounce rate, traffic source, etc.
Advertisement
Advertisement cookies are used to provide visitors with relevant ads and marketing campaigns. These cookies track visitors across websites and collect information to provide customized ads.
Others
Other uncategorized cookies are those that are being analyzed and have not been classified into a category as yet.
SAVE & ACCEPT
Powered by

By selecting your method of consent above, you confirm you would like to receive communications from CampervanCo and partners relating to news, updates, special offers, products and services. You have the right to withdraw your consent at any time. Our privacy policy explains how we may use the information you provide to us, the reasons we may do so, and the rights you have under data protection legislation.